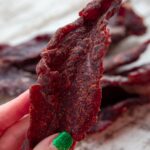 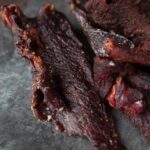 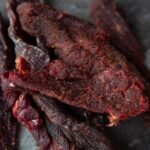 When you are browsing at the grocery store, there are a ton of jerky brands and even more flavors and varieties from which to choose. It is hard to know what companies are reputable, what ingredients are necessary, and if you are getting a fair amount of jerky for your money. This leads many foodies to consider making jerky at home using an oven, dehydrator, or a barbecue smoker.

But have you ever wondered what cut of steak is the best for making beef jerky yourself? There are lots of opinions out there, so it can be a tricky question to answer. Making your own jerky is a great option if you are looking to avoid additives like steroids or nitrates, or if you simply want to try your hand at a new hobby.

In this blog post, we will explore the best cuts of beef that are appropriate for jerky making, which cut is the most flavorful and results in tender jerky, and what other unusual and even exotic meats make interesting jerky!

Jerky 101: What To Look For in a Great Cut Of Meat For Jerky

When you think of beef, you may think of the old motto, “fat equals flavor”. But when it comes to making jerky, you actually want to start with cuts of steak that are considered lean meat. This might seem intimidating at first but bear in mind that you want your final product to be dry and chewy. Lean does not mean flavorless or entirely fatless, but remember that any excess fat will reduce the shelf life of your jerky because it spoils quickly.

Think of it this way: cuts of steak that are widely considered the best for grilling due to heavy intramuscular fat content are the worst cuts to make jerky. Outer fat also needs to be trimmed away, as the dehydration process for jerky will quickly turn it to gristle. Lastly, be sure to always use fresh meat to make your jerky recipe, because it is more tender and has more flavor. Avoid the freezer counter at the local butcher and never pre-freeze your steak before you begin making your jerky.

The Best Cuts of Steak For Making Jerky

One of the best cuts due to its high tenderness and low cost is the eye of round. It is a very lean cut of steak with a touch of interior marbling for flavor. A helpful, natural feature of the eye of round is that the grain of the meat runs only lengthwise, meaning you can easily slice it into strips.

You do have to remove a fat cap on the outside of the steak, but even a beginner can do this easily with a sharp knife.

The bottom round is an extremely lean cut of steak that is not tender, but this should not be a deal breaker as jerky should be a little chewy, right? It has rich flavor and interior marbling that makes all the extra work of removing the fat cap and cutting away large portions of intramuscular fat worth it. Like the eye of round it is also inexpensive, so the preparation before you make your jerky is actually a win in the long term.

Top round falls somewhere between the eye of round and bottom round on the typical steak tenderness scale. You may be familiar with the top round already if you enjoy London Broil. It is a very lean cut of steak that may not have any interior marbling at all, which may seem concerning at first. That being said, it is still a beefy, delicious cut of steak that makes some of the best beef jerky. You may have to remove a thin fat cap, but just like other cuts in this family, the top round will not cost you much.

Flank steak is a bit pricey, but its excellent flavor more than makes up for the cost. It contains more fat inside and out than the cuts mentioned so far, and for that reason, it will take more time to trim down.

Additionally, if you do not cut flank steak correctly, you will wind up with very tough jerky. Slicing against the grain, in thin slices, is key with this particular cut of steak.

No matter what portion of the sirloin (top or bottom) you pick, you are certain to wind up with great homemade jerky. It contains some inner fat marbling for flavor, so all you have to do is cut away the outer layer of fat to avoid gristle.

The price of sirloin steak is higher than round cuts, but it is also generally easier to find. It’s succulent and tender even after being dehydrated which makes it one of the best choices for serving to your kids to get them in on the jerky love!

Finally, the sirloin tip is considered one of the best meat cuts for flavorful jerky and is forgiving and versatile. With a little soy sauce, liquid smoke, Worcestershire sauce, and black pepper, this cut offers the best results for beginners and is so suitable for homemade beef jerky that you barely need a standard recipe, and can experiment with your own marinade easily.

Short loin is where some of your favorite steaks come from, including the porterhouse and the New York strip. This makes for delicious meat that is tender without being full of marbling, and if there is too much fat you can always trim it away.

You might balk at the idea of spending so much money on steak only to turn it into jerky, but it is most definitely worth it for the flavor–making this cut an excellent choice for more advanced jerky creators.

Some Cuts of Steak To Avoid For Making Jerky

Despite the fact that beef ribs produce some of our favorite cuts of meat, they are not suitable for making jerky. Rib meat is fine-grained and full of fat, meaning it is nearly impossible to cut to the thickness necessary for jerky. Dehydration also renders this particular cut of meat very crumbly, which makes for unpleasant eating.

Skirt steak holds a ton of flavor, but this cut can also be incredibly tough when cooked normally. The dehydration process for jerky only makes matters worse, leaving it nearly impossible for you to chew. If you are looking to make homemade dog treats, however, then skirt steak is a great option.

Unless you already own a jerky gun, ground beef should not be used to make jerky. While you can buy it lean and it is easy to add your own flavors, you will spend a ton of time rolling it out and slicing it into strips. Most jerky makers do not find it worth the hassle.

While tenderloin steak is delicious – especially filet mignon – it is also a tad too “tender” for jerky. What we mean is that if you enjoy the chewiness of jerky, then tenderloin steak is not the choice for you. While you might get excellent flavor and a tender bite from this cut of steak, the end product will not really be like eating jerky at all.

Brisket is a favorite on this blog, but is our vote for the least tender cut of meat when creating jerky. The muscle fibers and connective tissue need the smoking or braising process to slowly break down into tender meat and this is not accomplished in the process of making jerky. (We can teach you how to make a killer brisket though…check out our free brisket school here!)

What Other Meats Can Be Used To Make Jerky?

Alligator is still largely considered exotic meat, but it has gained popularity in recent years. It is high in protein but low in calories and bad saturated fat, which makes it perfect for dehydrating into jerky. On top of that, it has a mild taste paired with a firm texture, giving it a good balance of chew and flavor.

Elk meat is said to have a taste that is similar to beef, while being low in cholesterol and high in iron and protein. Most elk jerky that you can buy is prepared by hand, not a machine, which means you know you are getting a top-quality product free from additives like steroids and growth hormones. And if you make your own, you get to control the flavors.

Turkey jerky is something you have no doubt seen in your grocery store, probably near or alongside traditional beef jerky. Often you can find it in two flavors: natural and spicy. What is nice about turkey jerky is that it contains less sodium than most other jerky, while still packing a big tasty punch.

Venison jerky is another common find, especially if you live in an area where hunting is popular. But you can also make it yourself with meat that you buy at the store or hunt while it is in season. With venison being high in protein and B vitamins, it is a great choice to make into a tangy snack.

Fish jerky contains a ton of possible varieties within itself, including tuna, trout, salmon, and even shark. All fish jerkies are high in protein and Omega 3 fatty acids, and it packs and travels extremely well. If you are an avid fisher already, then fish jerky might be the best choice for you!

We hope that you enjoyed this look at the different cuts of steak that make the best jerky, as well as which ones to avoid, and other meats that can be used in place of beef.

Best of luck to you on your jerky-making journey!

Have questions? Need help? Have an addition or a suggestion to a recipe? Drop me a comment below!

If you make this recipe, I would LOVE to see it!

Follow us on Social Media using the links below!!