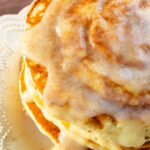 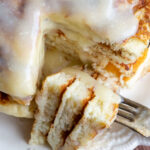 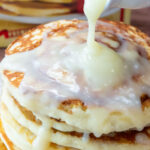 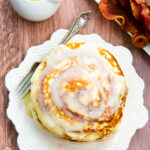 Meet the pancake recipe that your whole family is going to LOVE.

Popular breakfast chains like Denny’s and First Watch have been making creative, seasonal pancake recipes every year, but THIS YEAR they rolled out the latest food trend, and guys it’s worth every calorie!!

These pancakes taste just like cinnamon rolls, but without the overnight dough preparation— and with a simple buttermilk pancake mix the entire breakfast can come together in about 15 minutes.

THAT’S RIGHT, an easy fluffy pancake recipe with cinnamon swirls and decadent cream cheese glaze that can go from the I’m hungry stage to the stuffing your face stage in about 15 minutes. Crazy.

How To Prep Cinnamon Roll Pancakes

How To Make The Pancake Batter

For the pancake batter, I’m using Pioneer Buttermilk Pancake Mix, because I love the flavor and I think they make the perfect pancakes.

I follow the box instructions to create a simple batter and I prefer to make this batter in my medium bowl with a pour spout.

You can also pour your batter into a squeeze bottle for easy pancake pouring. This is the best way to prevent spills and making a mess of the pancake batter, especially if cooking with children.

If you have a pancake recipe you love you can use this method of making cinnamon swirl pancakes with your own recipe and substituting this cream cheese drizzle for the maple syrup.

Tips For Making The Cinnamon Swirl

To make the pancakes taste like homemade cinnamon rolls we make a dupe of the filling that gets smeared on the inside of the cinnamon roll batter before it’s rolled into a log and cut into buns.

At first, this part of the recipe gave me a lot of trouble but the secret is to keep the butter softened but thick. You don’t want to let the butter get too close to melting or it runs everywhere.

The heavy dose of cinnamon colors that nice pretty stripe on the swirl side of the pancake, and makes it taste like a cinnamon roll, but here is a do’s and don’t list for the finicky butter…

The cream cheese glaze can easily be made on the back of the stove while frying pancakes.

It will create the same style of cream cheese icing that is served with cinnamon rolls. The cream cheese mixture can be stored in an airtight container in the refrigerator for 3-5 days if you have leftovers.

To make the pancakes, you can melt about a tablespoon of melted butter in a nonstick skillet or spray it with cooking spray. Turn the heat to about medium-low heat.

(In a recent YouTube video, we make these pancakes on a hot griddle using my Blackstone Griddle big breakfast tutorial so that works too if you have a griddle.)

Pour the pancake batter out into a pancake form. You can make them as big or small as you want but we use about 1/3 c. batter in our photo tutorial.

When small bubbles form, squeeze the cinnamon mixture out onto the center of the pancake in a swirl design.

Using a wide spatula, flip the pancake over. This side will take less time to cook than the other side, about 30-60 seconds.

Move the completed pancakes to a baking sheet or a serving platter.

Repeat with the remaining batter.

Serve the warm pancakes with the cream cheese glaze.

This really is a pancake recipe the entire family will love but they’ll never get sick of eating!!

How To Store Leftovers Pancakes

Leftover cinnamon roll pancakes can be refrigerated in a ziplock baggie or frozen for several weeks. If freezing, press as much air out of the baggie as possible.

To reheat just microwave wrapped in a moist paper towel until warm, about 1-2 minutes.

Have questions? Need help? Have an addition or a suggestion to a recipe? Drop me a comment below!

If you make this recipe, I would LOVE to see it!

Follow us on Social Media using the links below!!

A dream breakfast starts with these cream cheese-glazed fluffy buttermilk pancakes swirled with fragrant cinnamon butter. It's a family favorite that comes together in 15 min or less!

How To Make Cinnamon Roll Pancakes

1. Combine the pancake mix, milk, and eggs in a large bowl.

2. Whisk well until the egg and milk mixture is thoroughly distributed into the flour mixture.

3. To make the cinnamon mixture combine the softened butter, cinnamon, and brown sugar in a small bowl. Stir with a fork until it resembles a brown paste.

4. Transfer this cinnamon roll filling into a sandwich sizes zip lock baggie. Press the air out of the bag and seal it.

To use the baggie snip the very tip of one corner of the bag with scissors and use the zip lock baggie like a piping bag to swirl the cinnamon onto the top of the pancake.

The key to getting good quality swirls is this cinnamon filling needs to be firm enough to easily stream out of the hole without being runny. If it gets too warm, just pop it back into the refrigerator.

5. In a small saucepan, combine all of the ingredients and heat over low heat. As the butter and cream cheese melts, stir in the powdered sugar until an icing like sauce forms. Remove from heat as soon as the ingredients are incorporated together and reserve until the pancakes are ready.

6. In a large nonstick skillet, melt 1 tablespoon of butter or use pan spray to grease the pan. Heat over medium heat.

7. Pour about 1/4 cup-1/3 cup of the batter into the skillet and let it spread out to form a pancake. Let the pancake cook until little bubbles form on top.

8. Then take the cinnamon-sugar mixture in the ziplock baggie and draw a sugar swirl onto the top of the pancake.

9. Flip the pancake with a spatula and cook 30 seconds to 1 min on the other side.

10. Remove the pancake to a serving platter and repeat with the rest of the batter until all of the pancakes are completed.

Serve the pancakes with the cream cheese icing glaze as the "syrup" on each serving.

I use Pioneer Buttermilk Pancake Mix for the best pancakes. Any homemade pancake recipe will also work with this method.

This nutritional information is provided as a courtesy as an estimate only. Consult with a dietician for precise estimates. This website makes no claims that the nutritional values listed are accurate.

Did you make this recipe? Please leave us a comment below and let us know how it went!