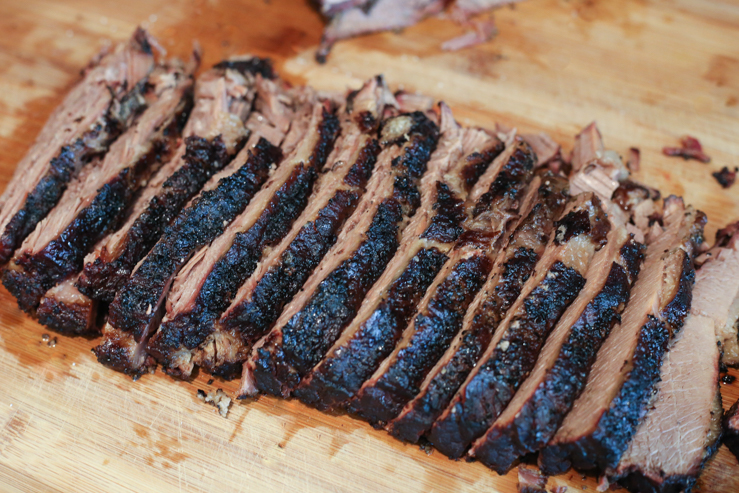 And now for the exciting conclusion of Aaron Franklin’s Brisket Tutorial, a home cook’s guide to insanely good brisket…

So, in Part 2 we left off with a super sleek, timed, and manicured Angus Prime brisket and a bowl of Aaron Franklin’s rub –which is essentially a classic Texas dalmatian rub.

Interesting Note: Franklin says that this style of rub has its roots in German or Czech style barbecue, (which I did not know and think is very cool.) 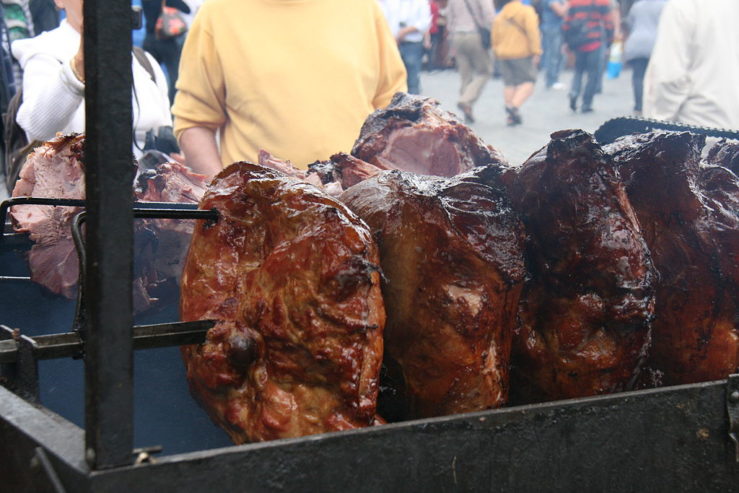 Texas was the final home of German and Czech settlers in the 19th century and they are celebrated for giving us our love of kolaches and sausage. In towns like West and Fredericksburg, this history is not only acknowledged in architecture and tourism, it’s celebrated with special festivals year-round.

(Now evidently, they also have dibbs on brisket rub.)

The rub in any brisket recipe serves 2 parts:

1 To flavor and enhance the meat

2 To help create a flavorful bark and attract smoke 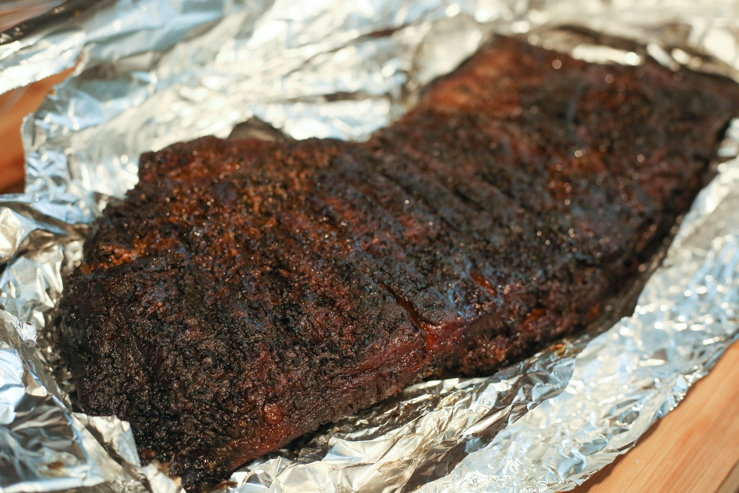 A Bark is the flavorful crust created on the exterior of meat from a chemical reaction (called the Maillard reaction) created by the combination of rub, wood smoke, temperature, and the protein in meat.

This is essentially the same reaction as caramelizing sugar, only in barbecue the Maillard reaction is happening in the presence of amino acids (which is another name for MEAT).

For more knowledge on barbecueology may I recommend the book “On Food and Cooking” by that silver fox, Harold Mcgee.

If you don’t want to read any more into food science, just remember that the Maillard reaction starts at around 310 degrees, and will continue until the heat source is removed, or moisture is introduced to the reaction.

Here is some links for your pepper enjoyment.

And here is why I love him… he encourages you to add onion powder, granulated garlic, chile powder, and all the other things… if you want.

At the restaurant, they use dalmatian rub, but in real life, he’ll hook it up with some extra flavors if he’s cooking for friends.

You do you… (But today this blog post is gonna do the official brisket.) 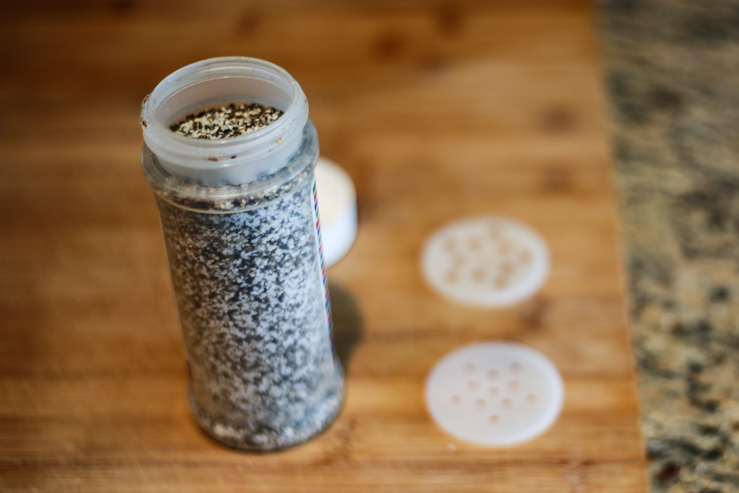 He shakes on the rub, about ½ c. total for a 12-lb. brisket, once the brisket has become room temperature. (It’s probably pretty close to room temp if you have just trimmed it.)

This serves two purposes. To let the flavor melt into the meat via sweating, and to eliminate hours of cook time by not starting with an ice-cold brisket.

So, shimmy shimmy shake shake until it looks like this… 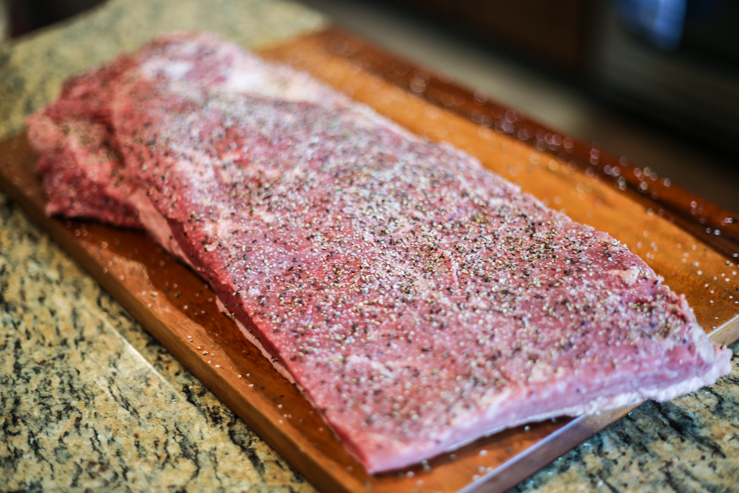 Then I put my brisket in a vacant oven to hang out while I start my smoker. (I find that when I am going in and out of the backdoor that hiding it in the oven helps protect the brisket from flies.) 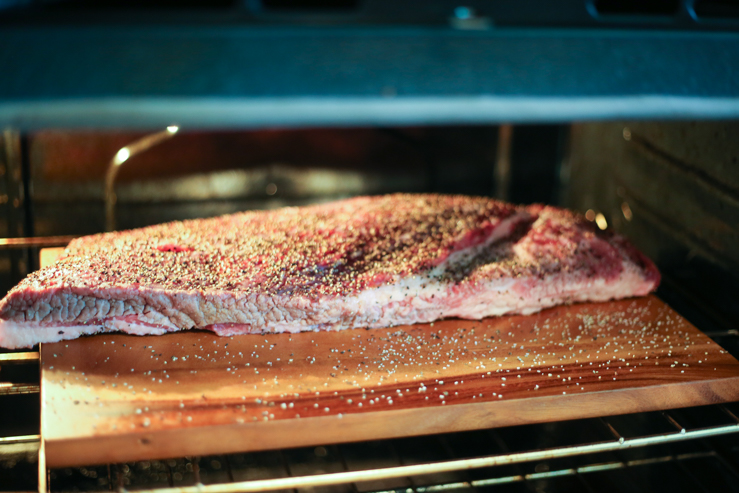 Alrighty, so today I am using my Masterbuilt Electric Smoker to prove that you can, and that it’s super easy if you’re doing this recipe for the first time. I don’t know about you but I see a $120 brisket as an investment that I would like to not mess up, please. 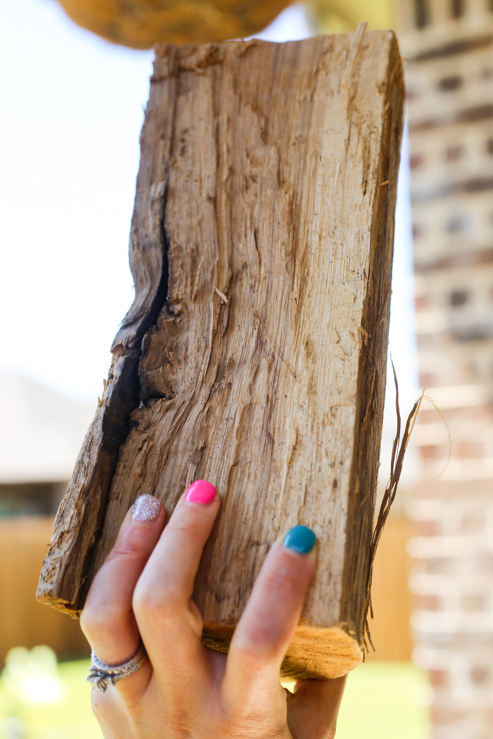 One thing that I do different when I use my electric smoker is creating my own wood chips.

You can accomplish this by pulling the really dry, exterior, wood bark off and/or using a small hand axe to pop little wood chips off. You can also use premade wood chips but I can never find Post Oak chips, and I also think they don’t burn as long as homemade wood chips.

It’s safe to say, I am skipping a huge chapter in the book regarding the wood fire— and that is because this smoker doesn’t have a fire pit. If you are using a traditional smoker, you can build a fire as you usually do and you should definitely buy the book for the pictures of Franklin’s method. Which, I hope you’re going to do anyway because he’s such a nice guy! 🙂

I set my smoker to 275 degrees and preheat and pre-smoke the unit.

Then I bring this beautiful thing outside, open the smoker, and place it on a middle rack. I will place foil or a small cookie sheet pan at the very bottom to catch the drippings (which I use to make tamales). 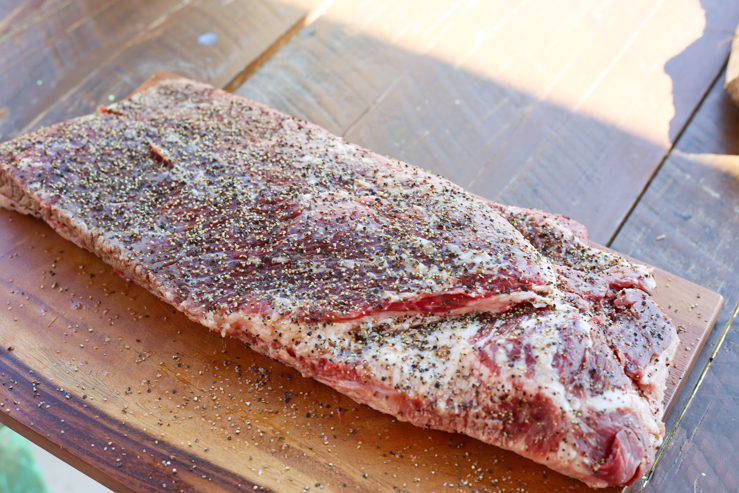 The first 4-6 hours the brisket will be open and exposed to smoke, sprayed occasionally with apple juice, then wrapped in butcher paper. You won’t wrap it until a dark, nearly black crust has developed.

For an 8 lb. brisket, I smoked the brisket for 4 hrs, then wrapped it in foil or butcher paper, and continued slow cooking it at 225 degrees until 5 am… for a total of 10-12 hours.

The brisket will be wiggly and loose, if it’s still tough, it’s not there yet, and needs to continue cooking. When in doubt cook to between 200-210 degrees. This is the brisket happy place. 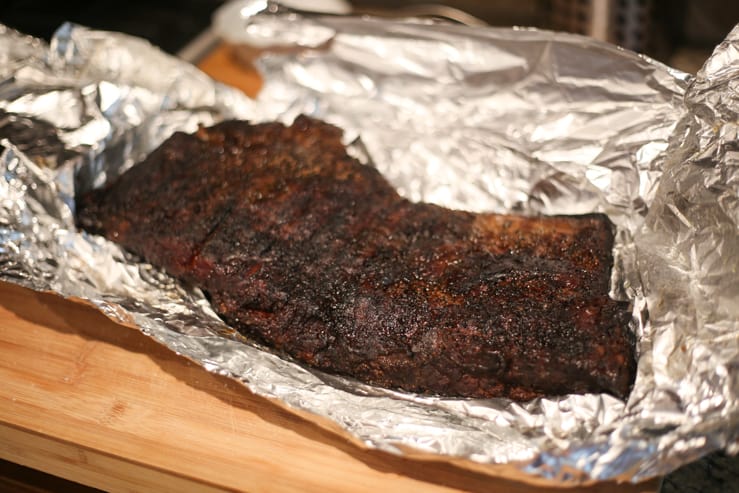 My Masterbuilt Smoker has a computer that I program to shut off at 5 am, so just about the time I am getting up for church, it’s ready! The meat has had a good hour or more of resting and it is still just warm to the touch. Breakfast tacos anyone?

Regardless of your particular situation, the meat must go through a resting process. Franklin recommends letting the meat rest until it hits 145ish degrees, which will take 40 min or longer depending on the size of the brisket. Then cut, and serve. 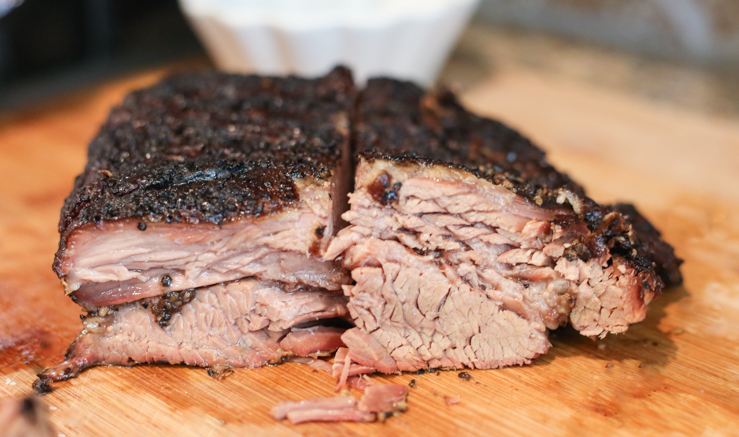 Thanks for reading this post on Aaron Franklin’s Brisket Tutorial! If you make this brisket, TAG ME on social media! I’d love to see how it turns out!

If you make this recipe, you’ll probably also be interested in Brisket Queso! A great way to use up leftover brisket! NOM!

Excellent 3 part post. I too have been in the legion of Franklin fans for a while. Noticed a possible typo on page

Hi! I just read Aaron’s book- I have the same electric Masterbuilt smoker —my question is where did u place the brisket inside the smoker on the racks? Top middle bottom? Did you place it upside down? Or the opposite?

Hi Lindsay! I switched to the REC TEC smoker but when I had the Masterbuilt I placed it in the center. You can remove the excess racks, it will only drip on them and make a bigger mess for you. I would also leave the rack at the bottom and cover it with foil. Then when it's been dripped on after the cook you can remove the foil and not have to scrub the smoker clean!